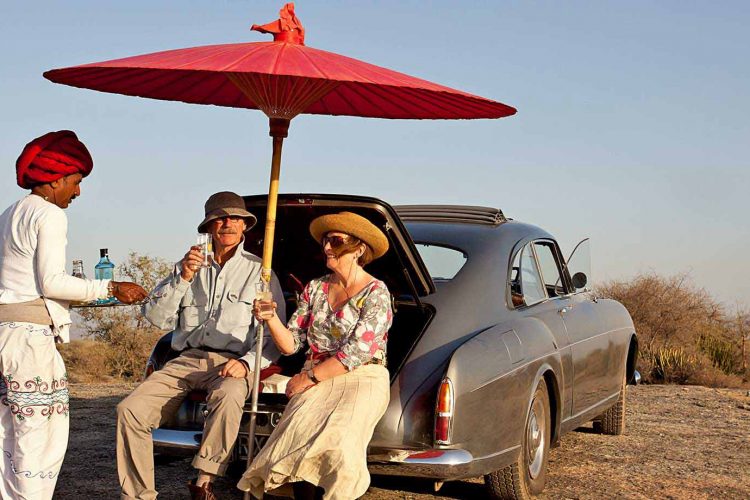 On arrival at Jaisalmer Railway Station, you will be met, assisted and get driven to the heart of Thar –desert i.e. to the Jaisalmer. On arrival check-in at your hotel, evening is free at leisure. Founded in the 12th century, Jaisalmer is one of the flourishing regions of the medieval era having the main trade routes from India to Arabia, Persia, Egypt and Europe.

In this parched boondocks, many former menarche’s and flush merchants have constructed a unique and marvelous dwelling out of sandstone, which have withstand the battering storms of the desert throughout the era.

A visit to the golden city of Rajasthan will not be complete unless you will view the charming sand dunes sited outside the city. You will be driven there in a jeep and have an opportunity to enjoy a short camel ride, En-route to the dunes; you will be taken to see the mysterious abandoned village of Kuldhara. For seven centuries, the Paliwal Brahmins made Kuldhara their home – one of 84 villages where they flourished in their heyday. The story goes that in the early 19th century the beautiful daughter of the village chief fell prey to the all-powerful prime minister of the king of Jaisalmer. The village people had two options – either surrender the girl to the minister or face his threats of harassment. The villagers packed up all their belongings and abandoned their homes, leaving behind a curse that anyone who tried to live in the village would perish; it has remained uninhabited ever since.

After breakfast, check-out from the hotel and get driven to Jodhpur, on arrival at Jodhpur, check-in at your hotel, later proceed for in & around sightseeing of Jodhpur visit, Jaswant Thada, an impressive Marble Memoriam built in 1899 and the museum situated in the Umaid Public Gardens, Mehrangarh Fort, located on a squat stonework Hill, including Moti-Mahal and Phool Mahal.

After breakfast, check-out from the hotel and get driven to Mt. Abu. On arrival at Mt. Abu, check-in at your hotel, later proceed for in & around sightseeing of Mt. Abu, visit the world famed Dilwara Jain Temple, Nakki Lake and Brahmin Kumari Ashram. Dilwara Temple is a cluster of extraordinary Jain shrines. Among the finest examples of these are two shrines in which the sculpture of statuette sandstone has reached unrivaled elevations. The ancient of the shrines is the ‘Vimal Vasahi’, erected in 1031 and devoted to the first tirthankar, Adinath. The front of the shrine stands the ‘House of Elephants’, with figures of elephants trooping in parade to the temple arrival.

After breakfast, check-out form the hotel and get driven to Udaipur. On arrival at Udaipur, check-in at your hotel, evening is free at leisure.

Udaipur is one of the most romantic continents, which is erected in the 1559; this white charming city is elaborately turreted and has terrace palaces, with quaint Havelis, temples and bathing Ghats reflecting the docile water of Lake Pichola.

After breakfast, check-out from the hotel and proceed for in & around sightseeing of Udaipur, visit Eklingji and Nagda temples are the shrines, which one must visit. Begin the trip with Eklingji. The city has in all about 70 shrines including the famed Eklingji Shiva temple. The novel edifice of the shrine was erected in 734 A.D. The shrine has a lovely bucolic style with definitely imprinted fortification. The shrine also has lovely and heavy silver doors. On entering the main hall, you will be greeted by hypnotic cologne and a silver image of ‘Nandi’. There are two more Nandi’s in the temple; one made of black stone and the other of brass. Shiva is worshipped here in the form of a four-faced black marble image.