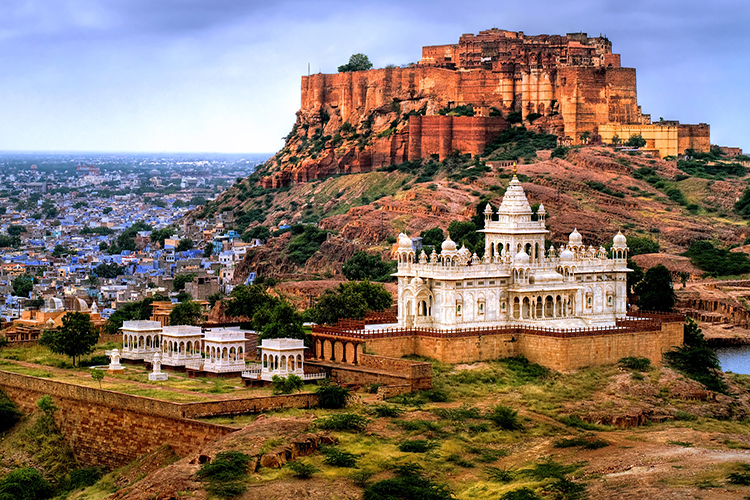 On arrival at Delhi Railway Station / Airport you will be met, assisted & get driven to your hotel, on arrival check-in at your hotel. Today you are free to explore the environs on your own.

Capital city of India, Delhi is one of the most populous cities where one can find every religion of people. The city renowned for its rich historic past and was dotted with numerous lip-smacking street foods. Delhi has lot to do from strolling jaunt to a bicycling tour.

Overnight stay at hotel in Delhi.

After breakfast proceed for local sightseeing of Delhi; visit the Jama Mosque at the old Delhi. While walking towards it, you will be meeting numerous artisans who will be alluring you towards the centuries old arts and crafts. One the most largely and shimmering mosque, Jama Masjid is sited at the old Delhi and capable of holding 25k devotes in its patio. Constructed in 1650, this was the final design profligacy of Shah Jahan, the Mughal monarch who built the city’s Red Fort and Agra’s Taj Mahal. Afternoon after the lunch explore New Delhi and visit places like Humayun’s Tomb, Qutub Minar, Lodi gardens and drive past Lutyens’ Delhi.

Erected in 1570, Humayun’s Tomb is Mughal architecture, which is delimited by the Charbagh garden (Persian style backyard) and is an example for ensuing Mughal design of royal mausoleums. This accomplishes its acme later with the construction of the Taj Mahal at Agra. Sited at the Mehrauli Archeological commons, the Qutub Minar multifaceted has copious chronological sites in it, most prominent will be ‘the Quwwatu’l-Islam’ (Valor of Islam) mosque having 7 meter – elevated iron pillar in its patio, while red and beige granite blocks of 72.5 meters (Qutub Minar) was within it giving a platform to it as a highest tower in India.

Erected by the Edwin Lutyens and Herbert Baker in 19th century, the New Delhi is a capital of India and a home to many historical sites, temples, parks and many more. With the heart of the city, one can observe the notable Rashtrapati Bhawan, previously familiar as the Viceroy’s House, located on the peak of Raisina mounts. These days this enormous citadel is used as the bureaucrat dwelling of the President.

Overnight stay at hotel in Delhi.

After breakfast, check-out form the hotel and get driven to Agra, on arrival check-in at your hotel. In an era perceptible by incursion and defenses, power was represent by grand citadel and fortress. The UNESCO World Heritage scheduled Agra Fort is one of these tombstones. This bastioned citadel presents an alarming manifestation with its gigantic red sandstone walls ranking over 20 metres in height, mounting including within its corral walls of 2.5 kilometers, the regal city of the Mughal rulers. The 38-hectare citadel has four entrances; the colossal Delhi Gate is measured the grandest and a masterwork of Akbar’s time. Built in 1568 both to improve safety and as the king’s ceremonial gate, it is overstated with hatch work in white marble. Later in the afternoon visit the Taj Mahal a white marble dome erected by the Emperor Shah Jahan in memory of his wife, Mumtaz, who died in 1631, this garden-tomb is both a massive and a sublime monument to love. 21 years are taken to complete this monument and around 20000 laborers and craftsmen from India and central Asia have worked on this.

Overnight stay at hotel in Agra.

After breakfast, check-out form the hotel and get driven to Agra, En-route visit Fatehpur Sikri, is the legends of Akbar and his famed courtiers, the nine jewels or Navaratnas, were born and was one of the best-preserved collections of Indian Mughal architecture in India. This town comprises a series of the royal palaces, harem, courts, a mosque, private quarters and other utility edifices. Fatehpur Sikri sits on rocky ridge, 3 kilometers (1.9 mi) in length and 1 km (0.62 mi) broad and citadel is enclosed by wall on three sides with the fourth bordered by a lake. Its architects were Tuhir Das and Dhruv Chawla and were constructed using Indian principles. The buildings of Fatehpur Sikri show an amalgamation of assorted local schools of architectural craftsmanship such as Gujarat and Bengal. This was because aboriginal craftsmen were used for the creation of the buildings. Influence from Hindu and Jain architecture is seen hand in hand with Islamic rudiments. The edifice material is used in all the edifices at Fatehpur Sikri, a palace-city complex, is the locally prey red sandstone, known as ‘Sikri sandstone’. It is entrance through gates along the 5 miles (8.0 km) long fort wall, namely, Delhi Gate, the Lal Gate, the Agra Gate, Birbal’s Gate, Chandanpal Gate, The Gwalior Gate, the Tehra Gate, the Chor Gate and the Ajmere Gate.
Later continue your drive to Jaipur. On arrival at Jaipur, check-in at your hotel.

After breakfast proceed for in & around sightseeing of Jaipur, to explore the India most flamboyant affirm and the beguiling chronological town. Here you will be visiting City Palace, Jantar Mantar, Hawa Mahal and Amber Fort.

Impressive merge of customary Rajput and Mughal building, the huge City multifaceted occupies nearly one-seventh of the ‘Pink City’. The dawdling camel’s safaris, unhurried cycle-rickshaws aggravate group of motorbikes, and everywhere energetic auto rickshaws watch for easy quarry. In the center of this bedlam, the magnificence of Jaipur’s royal past is islands of relative tranquil stir up a different lick and another world.

Jantar Mantar, Sawai Jai Singh II built compilation of exorbitant appliances. Sawai Jai like Jantar mantra has erected five other amenities at diverse site – the Jaipur observatory is the one of the chief and best potted. This has been emblazoned on the UNESCO World Heritage List as “an appearance having the exorbitant ability and astral notion of the court, learned prince at the end of the Mughal period”.
‘Palace of Winds’, or Hawa Mahal, is one of the most famous tourist lures in Jaipur. Sited in the heart of the town, the charming red-sandstone citadel was erected in 17th century by the Maharaja Sawai Pratap Singh. The palace was built to provide the regal women a right to views the everyday life through the 953 miniature windows called jharokhas that are bedecked with complicated latticework.

Another charming palace is Amber, sited at the 11 kilometers from Jaipur and was erected by the Kachwahas of Amber. The gigantic fort palace multifaceted was named after named of the goddess Amba. Their craggy sinister externals contradict an internal ecstasy with a good-looking synthesis of art and edifice.

In the afternoon you can stroll towards the old Jaipur markets where you can experience a maze of path and explosion with color and chaos. The minute shops over there are loaded with the collection of goods like brocades, gold overstated sarong and sparkling saris; jewellery and trinkets; cologne; customary camel-leather shoes and bangles of glass, tiny paintings and puppets; azure ceramic and carvings in sandstone and granite; carpets and blankets; furniture and antiques; as well as shops selling paraphernalia, ironware, brassware and house wares. This will be a good opportunity for the shopping lovers.

After breakfast, check-out from the hotel and get driven to the ‘sun city’ of Rajasthan because bright, sunny weather allure people all the year around. On arrival check-in at your hotel, evening is free at leisure.

Founded in 1459 by Rao Jodha, a Rajput chief of the Rathore clan, Jodhpur was once the capital of the Marwar state and a trading center for the opium, copper, silk, sandals, date palms and coffee. Now the area has matured to befall as the second largest city of the Rajasthan but without peeling its archeological finery.

After breakfast, proceed for in & around sightseeing of Jodhpur, there are numerous citadels within the city of Rajasthan but none can be compared with the Mehrangarh, the brawny fortress, which towers over the ‘sun city’ gives a glorious sight and an architectural magnum- opus. At the base of this citadel, one can see a clutter of Brahmin-blue cubes, elongated out to the 10km-long. The Sun City is also renowned as a blue city because inside it is knot of zigzag, sparkling, medieval boulevards, which can never be seen in any other place.

Or another architectural landmark in city will be Jaswant Thada white memorial, founded in 1899 by Jaswant Singh’s Maharani in her husband’s reminiscence. After lunch you can visit to the customary burial position of Jodhpur rulers, which include the portrayals of rulers and Maharajas of Jodhpur while the grounds is delicately imprinted with gazebos, a beautiful backyard with small lakes all around.

After breakfast, check-out from the hotel and get driven to Udaipur, which is one of the most romantic continents. Constructed in 1559, this white charming city is elaborately turreted and has terrace palaces, with quaint Havelis, temples and bathing Ghats reflecting the docile water of Lake Pichola, En-route visit Ranakpur Chaumukha Shrine erected in 1439. This is a marble shrine which has the 29 halls reinforced by 1444 pillars. On arrival at Udaipur, check-in at your hotel. In the evening take a magnificent boat tour over the picturesque Lake Pichola (at your own cost) to admire the royal buildings around the Lake and enjoy the scenic sunset view. From the lake you have a wonderful view of the City Palace stretching along the east bank, while the south bank has pleasant gardens running down to the waterside.

After breakfast, proceed for in & around sightseeing of Udaipur, visit the glorious City Palace that consist of four major and numerous minor palaces constructed by the Mewar rulers and each fortress is perfectly included in medieval style. Continue your trip and further move towards the Jagdish Mandir temple multifaceted, sited at the main gate of the city palace. The shrine was erected in the 1651and was devoted to the Jagannath, a facet of Lord Vishnu (the black granite icon preserve within). At the afternoon after having lunch, stroll throughout the Saheliyon-ki-Bari garden, which is formed by the Sangram Singh in the 18th century. The garden is also a mound of the Fatah Sagar Lake characteristics the lotus puddles, granite gazebo and elephant-shaped cascades.

Later in the afternoon you can take a yacht traverse on the beautiful Lake Pichola. From vessel you can vista the two islands- one is the Jag Niwas Island and other Jag Mandir Island. The Jag Niwas Island is a renowned lake palace, constructed by the Maharana Jagat Singh II in 1754. At present, this palace is the comfy heritage hotel, with patio’s, sprays and precincts. The rumors for this property is that Mughal Emperor Shah Jahan derivative some of his ideas for the Taj Mahal from Jag Mandir after staying at this place. You will also be observing the astonishing sunset from this palace.